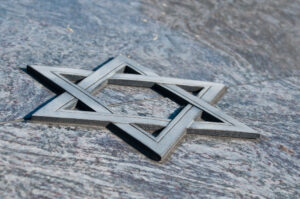 Jewish communities are under attack.  Jews have experienced a very heightened level of fear as we watch virulent Antisemitic verbal attacks, online harassment, vandalism, and violence take place in the United States and around the world.  As Jews, we experience a downplaying of our fears far too often.

In 2015, the late Justice Ruth Bader Ginsburg and Rabbi Lauren Holtzblatt wrote the following in an insert to the American Jewish Service’s Passover Haggadah:  “While there is much light in today’s world, there remains in our universe disheartening darkness, inhumanity spawned by ignorance and hate….[W]ith vision and action we can join hands with others of like mind, kindling lights along paths leading out of the terrifying darkness.”  We must play a role in addressing and responding to the rise in Antisemitism and Antisemitic hate crimes.  So, how can we do so?  Here are some suggestions:

Good news:  On November 1, the Los Angeles City Council unanimously passed a resolution endorsing the International Holocaust Remembrance Alliance (IHRA) definition of Antisemitism, the same definition used by the United States State Department and 22 states.  This resolution requires Los Angeles city departments, staff, elected and appointed officials and contract agencies to familiarize themselves with the IHRA definition and incorporate it into their day-to-day operations.

In a 2018 interview, Justice Ginsburg was asked how her Jewishness affected her work as a lawyer and a Supreme Court Justice.  She responded that it did in the “sense of being an outsider — of being one of the people who had suffered oppression for no … no sensible reason….It makes you more empathetic to other people who are not insiders, who are outsiders….The sense of being a member of a minority group that somehow has survived generations and generations of hatred and plundering.”  ברוך דיין האמת.  Baruch dayan ha’emet.  Blessed is the true justice.  We have seen an outpouring of support for the Jewish community.  The strength of the Jewish community comes from just that – community.  That is where miracles happen.

Albert Einstein wrote:  “The pursuit of knowledge for its own sake, an almost fanatical love of justice and the desire for personal independence – these are the features of the Jewish tradition which make me thank my stars that I belong to it.”  Never in my life have I been prouder to be Jewish.  I stand ready, willing and able to stand up to and fight against Antisemitism.  I look forward to standing with you.

Jessica Kronstadt is a proud Jewish woman.  She is the granddaughter of Holocaust refugees.  She currently serves as a Deputy District Attorney at the Los Angeles County District Attorney’s Office and as Co-Chair of WLALA’s Access to Justice Committee.