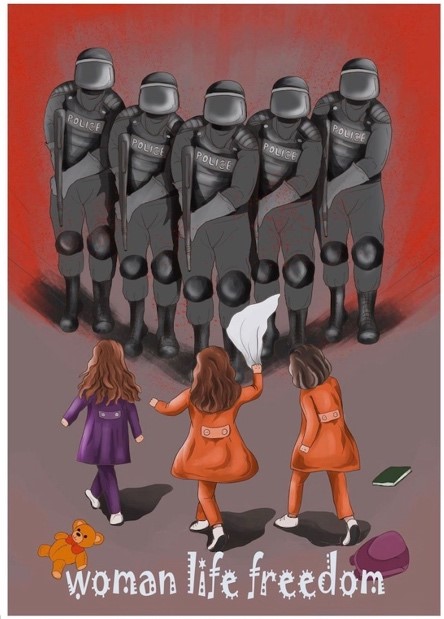 Farah Tabibkhoei is the Shareholder for Dominium Law, APC. She recently spoke with Goli Azadeh for background and insight on the current mass protests in Iran. Art (Top) by Zaha Rahimzadeh.

What sparked the protests in Iran in late September?

On September 16, 2022, Mahsa “Jhina” Amini, a Kurdish 22 year-old woman (whose name is officially Mahsa on her birth certificate due to long discriminatory practices against the Kurdish population by the Islamic Republic, including their refusal to legally allow Kurdish names), was killed at the hands of the “Morality Police.” The Morality Police is a group responsible for ensuring compliance by women in Iran with the Islamic Republic’s mandatory hijab laws. These laws go beyond just the headscarf. Women are required to wear a “manto,” a long covering similar to a coat or poncho, over their clothes, as well as long pants (that are regulated according to the current fashion trends – if skinny jeans are in, you can be arrested for those; if torn jeans are in, you can be arrested for those). A “manto” must cover below the thighs, cannot be too tight, and usually must be buttoned or closed in the front in some way. This is of course not at all how all Iranian women have been dressing for the past 40 years. Instead, some years they were able to get away with more freedom of choice for clothes (when a more liberal president was in power). This past year, women are forced to adhere to the rules or risk their lives. Jhina, was simply not dressed up to the current “standards.” As a result, she was taken away by the Morality Police, in a van that too many Iranian women know all too well, myself included, and then was eventually met with brutal force. She was in a coma for a few days, and eventually died.

Jhina’s Kurdish identity, as well as her detention by the Morality Police in Tehran – which was reported by prominent journalists – gave rise to the protests. The Kurdish population have long been subjected to mass killings and kidnappings at the hands of the regime, and also have gone largely unheard of by the Iranian population overall. This has created unique strength and unity amongst them, which spread across the country, as women across all cities could see themselves in Jhina. Any one of us could have ended up dead once we stepped foot into that van. We are lucky to be here, but are fueled by that knowledge, as well as survivor’s guilt, to not rest until this injustice is remedied.

What objectives are the protesters fighting to achieve?

Initially, the protests were for Jhina. They were amplifying the voices of her grieving parents, who were right to demand a response from the government officials regarding her killing. Instead, the government published edited video footage of Jhina during her last moments following her arrest, in an attempt to absolve themselves from all wrongdoing. They also started pressuring Jhina’s family to get false confessions from them: tell the people we did not kill your daughter. Jhina’s family resisted and refused. This response from the government is not unique.

At every turn, the Islamic Regime has used misinformation, edited documents and footage, forced and tortured confessions and other tools to claim a lack of wrong doing. This was seen when they shot down a passenger airplane, Flight 752, killing all 176 passengers who were traveling to Canada. It was even more evident during the 2009 election – which sparked the Green Movement – where the government blatantly stole an election from the people, despite claiming to be a democratic country.

While these are two major examples, Iranians have seen thousands of such incidents during their lifetime. From the regime arresting human rights activists, journalists, environmentalists, scientists, and geniuses, and claiming that they were guilty of “espionage” to all the smaller ways the regime continues to spew propaganda and misinformation. Recently, a female rock climber’s decision to compete without her hijab was explained away as a time-constraint issue.

These events seemed to be the final straw. The Iranian population, oppressed and silenced through killings, torture, arrests, and harassment, finally seemed to have had enough. They are demanding freedom: freedom of speech, freedom of choice, bodily autonomy, as well as equality for women and minority groups. At the center of all of these demands is regime change: the Iranian population do not want the authoritative theocracy that has ruled them for over 40 years.

Is this a women-led movement?

Yes. Some have called the Islamic Republic a gender apartheid regime. Despite the cruel and life-threatening gender laws enforced by the Islamic Republic, universities are currently made up of more women than men. This, coupled with the anger and suffering that women have endured for years, has given rise to a fierce, educated and self-aware woman-led movement. While mandatory hijab and unequal inheritance laws are some common examples of restrictions women have had to face, I always think of one example that encompasses numerous struggles faced by women daily.

In the beginning of the revolution, when any opposition was being met with arrests and executions, a distant family member of mine woke up to screams and cries from her neighbor. This wasn’t surprising as their daughter had recently been arrested, for unclear reasons, without any official conviction, or even a phone call to her loved ones to say where she was or if she was okay. They were anticipating news of her possible execution. That day, the screams were unbearable. When everyone gathered downstairs, around the grieving mother who sat shaking on the floor, they noticed a box of sweets and a bouquet of flowers next to her.

In what the Islamic Republic claims as “Islam,” virgin girls cannot be executed. And pre-marital relations are a sin. So, virgin girls were first “married off” to someone, raped by them, then executed. The sweets and flowers were from a man who showed up at their home, declaring to be their new “son-in-law.”  This is one story, one example, from one family. But there are millions. Millions who have been passed down unfathomable generational trauma and continue to experience their own. So yes, this movement is led by women, who for years have persevered despite unimaginable oppression and pain.

What are some other examples of acts of bravery we have seen by protesters in Iran to enact change? (By women? University students? Athletes? Others?)

The first examples came from our youngest. Young 16-year-olds who were shot dead while protesting for their freedom. Nika Shahkarami and Sarina Esmailzadeh are only two of those brave souls, although it is estimated that there are many who have gone unknown and unrecognized. Both girls were advocated for freedom and fundamental human rights. They would sing and blog in their free time, without the mandatory hijab, dreaming of a world they could live freely in.  University students have been protesting every day across the country. Shouting and chanting in the name of Mahsa, Nika, Sarina, and all our lost and imprisoned souls. They are routinely shot at, arrested, taken away brutally (putting black trash bags over their heads as they were taken away from Sharif University, a university known for fostering geniuses) and also killed. Athletes, actors, celebrities, and other people with a platform have also routinely spoken up on this issue and have been met with threats, their passports being taken away, beatings, arrests, and forced confessions. Most recently, Elnaz Rakebi, a professional climber, competed in a final without her mandatory hijab under the flag of the Islamic Republic. Almost immediately, reports of her being harassed, family members possibly arrested, and her phone being confiscated broke out. Eventually, upon her arrival back in Tehran, she was forced by state media to claim that she participated without her hijab “accidentally.” A comment that was anticipated because as Iranians we all know the choices are: 1. forced confession or 2. imprisonment/death.

The protests are continuing and have garnered international attention.  What are the driving forces behind its spread and the attention and support it has garnered in Iran and worldwide? (Examples: Effect of traditional media? Social media?)

Social media has done something for this movement and the people of Iran that no form of traditional media has been able to do for years. Despite the intense internet crackdown, people have been using social media both as a news source and as a way to boost morale, spread the word, and plan for the next steps in the movement.

The only news networks in Iran are state-controlled, and thus rarely report news accurately or effectively. Some Farsi-speaking news channels outside of Iran have lost the trust of numerous Iranians, and as a result, online accounts with anonymous owners do the majority of news reporting (see @1500tasvir on Instagram and @OutFarsi on Twitter). Just recently, a single student managed to poke holes in recent claims of Negar Mortazavi, member of the National Iranian American Council (who many Iranian’s inside Iran do not approve of as a representative), acting as the kind of journalist that Iranians have been lacking for years.

What makes this movement different from past protests in Iran against the Islamic Regime?

I think the main thing is that a barrier of fear has been broken. The regime has pulled out all the stops throughout the years (mass executions, mass arrests, complete shut down of the internet, etc.) and this time, with the protest chants immediately taking the shape of hopes for regime change, people are finally demanding results.

And this time, the fear of stopping is greater than if they keep going. Everyone knows that if the protests do not give rise to some results, then many more will be executed and arrested.

Finally, the idea that Mahsa “Jhina” Amini could have been any of us. Jhina was an ordinary person. She wasn’t fighting for anything, she wasn’t political or an activist. She was trying to visit her family in a foreign city. She was trying to live her life. Anyone, and everyone, under the current regime has their life taken away from them both repeatedly and at unthought of hours. Her tragic story served as a sort of awakening for a population that was already bubbling with anger and frustration.  The slogan “woman, life, freedom” or “Jin, Jiyan, Azadi,” is a Kurdish slogan, coined by Kurdish women, and one that has long been used by the Kurdish population during their fights against oppression. The slogan is explained in further detail in this video.

We have seen a lot of art inspired by the protests.  Do you have a favorite?

One of my favorite pieces of art coming out of the protests was inspired by a video of little girls fiercely chanting “woman, life, freedom.” I think the art encompasses two things:

How can our local community learn more about the protests or support its cause?

For specific information on how you can help, please visit freedomforiran.carrd.co.  However, if you have read this far, please have conversations about this movement with your family, friends, colleagues, neighbors, your cashier at Trader Joe’s and anyone else. These conversations keep people engaged and as a result help us keep the international community’s attention.

If you have social media, please share about it online. I mean this sincerely when I say every single post is effective. The Islamic Regime only thrives under silence, and our best tools against them is to use our voices. Amplify Iranian voices. Tweet about it, post about it, talk about it. Be their voice. I assure you, it can save lives.